Tony Jordan donates the parking shovel from the top of a $32 million parking lot at Lloyd Center.

The parking lot occupies a unique place in the modern American cultural zeitgeist. How often do you hear people bragging or bemoaning their parallel parking skills or complaining about the hellish landscape of Trader Joe’s parking lot? Considering how much money and effort goes into planning and building parking structures and spaces, it makes sense that we talk about it so much.

Despite its real estate in our brains, however, the average American hasn’t really peeked behind the parking lot curtain. On Bike Loud PDX’s latest political ride hosted by their West Chapter, local parking guru Tony Jordan aimed to share what lies beneath the asphalt surface of the parking lot in Portland.

Jordan chairs the Parking Reform Network, a Portland-based nonprofit whose mission is to educate the public about the impact of parking on our society and create policy change. Last Friday, he led a group bike ride around downtown and Lloyd’s, taking participants on an odyssey through Portland’s parking history.

[Video below is a recap of the ride by Amit Zinman.]

I got some insight into the parking policy before the ride, especially after hearing Jordan speak alongside other parking experts at last month’s YIMBYtown conference. But it was a different experience to see how those plans play out in real life. As we strolled through downtown, Jordan shared how parking shaped large parts of Portland’s DNA.

One location in downtown Portland affected by parking ills is O’Bryant Square, which was once an open plaza park and is now a fenced-in concrete slab taking up space. The Portland Bureau of Transportation closed the plaza in 2018 due to structural issues with the parking lot beneath the park, which would require a few million dollars to repair.

“It’s not necessarily the city’s priority to spend the money to rebuild this parking lot. So instead of a park, we have a fenced-in broken parking garage,” Jordan said.

Jordan led us across the river where we climbed to the top of the (mostly empty) seven-story parking lot of the Oregon Convention Center on NE Multnomah St and 2nd Ave. You get a nice view of the city from this vantage point, as well as a concrete playground to roll around in, but is it really worth the $32 million it cost to build and the space it busy today? 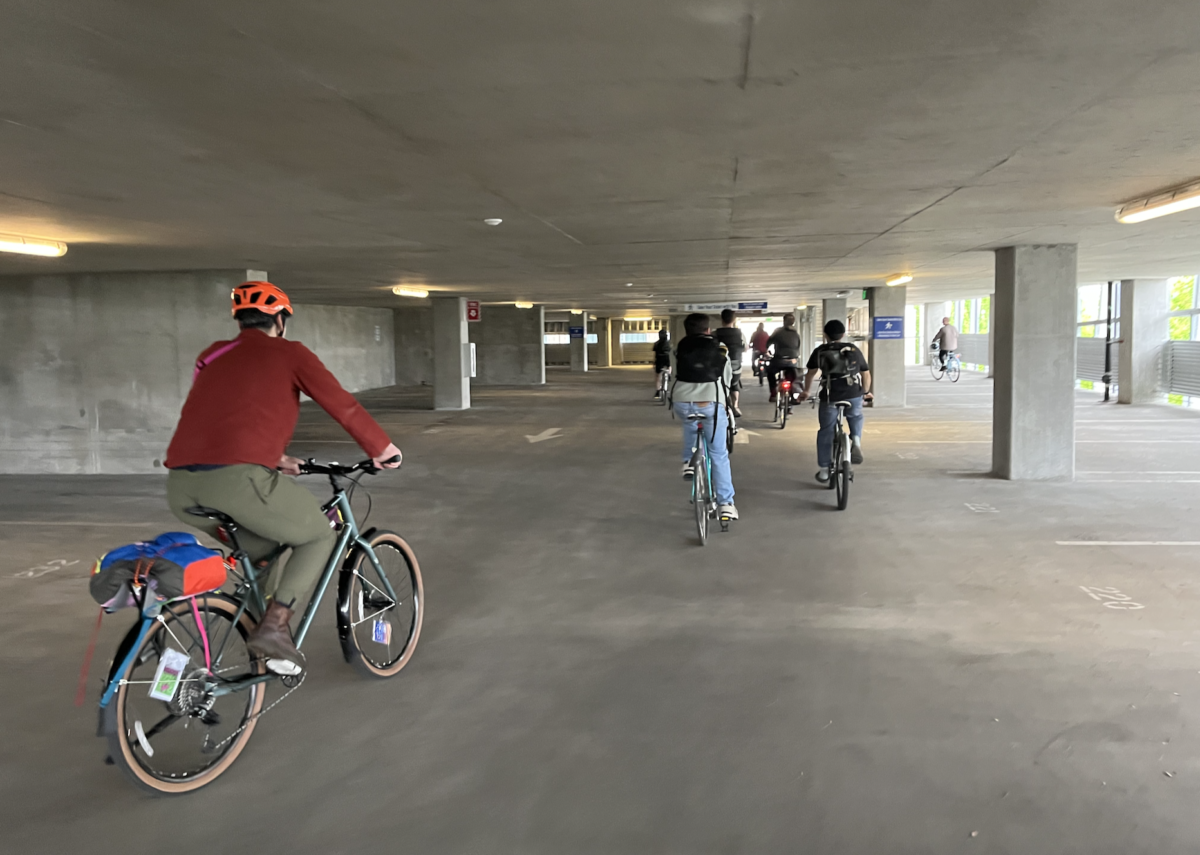 A plus side of empty parking garages is the smooth pavement they provide for biking or skating.

Among the many problems created by building plentiful parking is the central fact that more parking encourages more driving. The convention center parking lot is a good example of this: it is located directly across from the Hyatt Regency, which is primarily a tourist resort. This district is perfectly served by public transport: the MAX red line from the airport essentially drops you off in front of the hotel. But if you took the MAX, who would fill all those lonely parking spots? 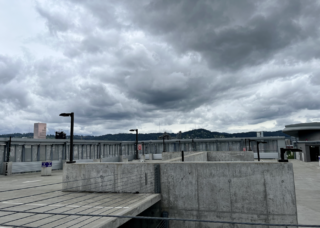 View from the top.

“In addition to the MAX at the airport, they also have a large number of parking lots and rental car services,” Jordan said.

Instead of investing more in public transport and encouraging people to use the public transport that we already have, the construction of parking lots encourages people to drive cars and gives the impression that it is necessary to have a car to get around when it really isn’t.

After driving around the empty parking lot, we headed to the parking lot near Holladay Park, directly across from the Lloyd Center, where Sightline Institute author Michael Andersen briefly took over to explain how Lloyd’s many parking lots Center have emerged. 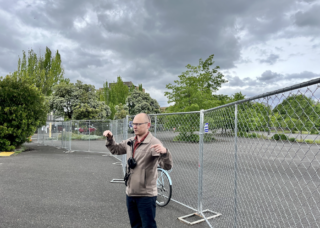 Mall parking lots are pretty much the same everywhere: miserable labyrinths filled with annoyed shoppers desperate to find the perfect place to park their cars. Andersen shared a very interesting theory about the mall in American society as places where people can take a short respite from cars and pretend to live in walkable cities where the streets are lined with shops. He said malls are little villages “built in the middle of a circle of parking lots” where people drive in, park their car, play in the mall and then drive home.

This route was only a brief overview of parking policy in Portland, and there is much more information below. But even a two-hour political commute has the power to open someone’s eyes to the importance our city places on parking and how it impacts everyone’s lives, even people who don’t drive a car.

The big takeaway? We don’t need more parking. And the more we build, the more we encourage people to keep driving cars.

If you’re inspired to join one of Bike Loud’s political rides across the city, keep an eye on our calendar or sign up for their monthly newsletter.

Taylor has been BikePortland’s editor since November 2021. She has also written for Street Roots and Eugene Weekly. Contact her at [email protected]